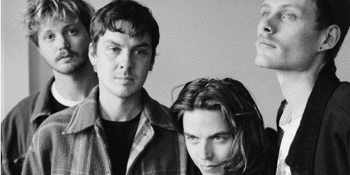 2019 saw Sydney’s undefinable rockers, 100 lay down the foundation for an explosive 2020. They kicked off the year with 2 FBi SMAC nominations (Best Live Act and Next Big Thing), toured nationally with Pist Idiots, played a string of festivals, packed out their BIGSOUND showcases and capped off the year supporting Cold Chisel at The Factory Theatre.

Coming into 2020 in full stride 100 announce their first tour of the year. Having spent what little downtime they had left last year the band locked themselves away in their Sydenham studio to pen their highly anticipated sophomore EP due out Easter this year.

Weightless, the first offering from the release is a testament to the band’s song writing. A souring 6-minute behemoth of a track that explores growing up as an outsider in a rural town.

On Weightless, Tucker says: ”It’s a story from the hot and dull Australian suburbs, for the kids born into mediocrity and low expectation, that choose to search for a life bigger and more challenging. Who, while planning their escape will bide their time by going inward to find refuge in a world of in books, music, art and film.”

100 will be kicking the tour off in Sydney this week as the Triple J Unearthed winners for Laneway Festival, followed by a series of dates across the east coast.

Tommy Faith, Triple J – “100 are cutting their way to a cult following via some clever, culturally incisive songs that go straight to the bone. A great band.”

FBI RADIO – 100 have all the hallmarks of an incredible band. Not only are they sporting talent in spades and making their own unique mark on a genre that is pretty well saturated in Sydney scenes…