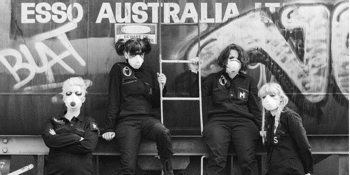 Glitoris has earned a reputation as one of Australia’s most fearlessly political,uncompromising and unforgettable live acts. Crowned ‘Queens of AustralianPunk’ (The Brag), Glitoris release their brutal, unapologetic hard rock anthem‘Slut Power’ (14/2/20): a raging call-to-arms dealing with the insidiou snature of violence against women.

Following up on the critically acclaimed debut album ‘The Policy’ (2018), extensive touring with the likes of Regurgitator and festivals including Groovin’ The Moo, 2020 promises to be their fiercest yet